It’s almost like she [Denise, the director and editor] sat playing keyboards on all the different camera angles. That’s one of the things that has made me very proud of this is that Denise was able to put all this stuff [different angles] into the video and make it flow as it does…. Great f**king job!

The multi-camera live performance hit #1 on the Billboard Music Video Charts in the U.S. and Sweden on the first week of release. 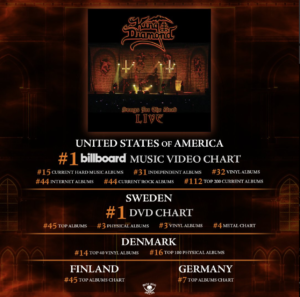 Beyond the Flames: Home Video Part II” is a treasure trove of gripping content containing over three and a half hours of footage that is sure to delight Killswitch Engage fans.

It’s been awhile since I’ve seen a film about music as good as the three-hour documentary on the history of the death-metal band Cannibal Corpse.
Ben Ratliff, NY Times

Denise is fantastic to work with, ultimately professional and always delivers far more and better content than I expect, each time raising her own bar and finding a way to bring a fresh look and twist on the music video documentary and live video genre! She pours heart and soul into each film.
Tracy Vera, Senior Vice President/ General Manager, Metal Blade Records

All the praise should go to [director/producer] Denise Korycki. She basically did everything. She shot the footage, she edited it and she was the one who was in charge of organizing it and making it into a coherent story. That had to be a pretty difficult job for her because there is a lot of ground to cover.
Alex Webster, Bassist, Cannibal Corpse

For a band to survive this long is rare; to thrive the entire time is unheard of… Centuries of Torment: The First 20 Years heartwarmingly pays tribute to that world… it’s accessible and smoothly edited… Cannibal Corpse have put down roots far and wide, and this film makes fascinating detours to explore them.
Cosmo Lee, Decibel Magazine

An instant classic of the form… it’s an entertaining and incredibly funny portrait of four intelligent, wry cutups who also happen to be accomplished musicians.
Ned Raggett, All Music Guide

The priceless interviews, killer live footage (including some of the members’ pre-Mastodon bands), and the perpetual behind-the-scenes footage on this three-hour DVD reveal that metal’s premier whale slayers not only have twice as much talent as most of their peers; they’ve got about four times as much personality.
J. Bennett, Revolver Magazine

The Workhorse Chronicles is a worthy introduction to the band and a good synopsis of their life to date. If things pan out as some critics have been predicting, then this could one day become a historical record of how quaint Mastodon’s early days were. Who knows, maybe they will become the next Metallica.
Kev Truong, Blistering

Danko Jones “Bring on the Mountain”

This 90 minute documentary takes you into the mind, heart and soul of Danko Jones. After watching, you come away feeling like you know the band, and that you’ve actually learnt something, which is what a documentary should be about. This DVD is utterly thrilling.

There are many valuable lessons to be learned from watching this film, so pay attention, up and coming rockers. Bring On The Mountain is a great package, highly recommended to anyone who IS a Danko Jones fan, isn’t YET a Danko Jones fan, or any independent band that wants to learn how to do it right.
Hellbound

As I Lay Dying “This Is Who We Are”

No stone is left unturned and director Denise Korycki makes sure that the film flows from start to finish at a compelling pace. Even if you’re not a fan of the band, ‘This Is Who We Are’ is the kind of thing any fan of heavy music can appreciate.
Ramirez, Ultimate Guitar

This is the best DVD I have ever seen. I love everything about it. There just isn’t anything to hate about it. If someone took it, I would definitely get a new one.
Fan Review, Ultimate Guitar

The Zen of Screaming

This DVD is as entertaining as it is informative and a must-have tool for vocalists of today. It’s the Bible for any extreme music vocalist.
Tom Beaujour, Editor in Chief, Revolver Magazine